It’s been a few weeks since my last post and so much has happened.  I spent the past three weeks studying alternative treatments for cancer and have settled on Chris Wark’s program called Chris Beat Cancer. Chris was diagnosed with stage 3 colon cancer ten years ago and believes he’s been cancer free as a result of his diet and lifestyle choices.  He offers a 10 day series of webinars that give the details of what he eats, his lifestyle choices and his faith.  One of the things I like about his approach is he’s very honest and straightforward when talking about traditional medicine versus trying to beat cancer with food alone.  Some of the other resources I’ve consulted were adamant that all doctors and hospitals are evil and that by simply eating a plant based diet you can cure whatever ails you.  I purchased his program but also have an additional program to share free of charge.  Please let me know if you or a loved one would like access.

Based on my research and after much prayer for wisdom, I have decided to follow an integrated program with three components; traditional medicine, a completely plant based diet and my deep faith in God.  This Tuesday will be my third trip to the National Institutes of Health in Bethesda, MD.  I’m receiving a total of 6 vaccines called Prostvac, one injection every 3 weeks, that should extend the effectiveness of the hormone therapy I’m taking.  The hormone therapy, Lupron, is standard of care for men with advanced prostate cancer but the Prostvac is experimental.  In December I will start chemotherapy, again with the hopes that it will help the Lupron last longer.  Later this month I’ll be returning to NIH for my vaccine but I’ll also be seeing an orthopedic surgeon at Walter Reed Hospital which is close to NIH.  The lesions on my pelvis and femur are fairly aggressive and my doctors in Bethesda are concerned about maintaining the strength of these bones.  Between my local oncologist and the good folks at NIH I am getting the best care anyone could ask for.

Two weeks ago I bought a juicer and am juicing every day.  According to what I’ve read, the juice of carrots, celery, beets and ginger are chock full of anti-oxidants and help my body’s immune system to fight cancer cells.  I make up 24 ounces every day and drink 8 ounces three times per day.  Cancer cells are already in our bodies and until we feed them they don’t grow.  Some of the junk we eat feeds cancer while some actually starves it.  I have to be honest, up until a few years ago my diet was horrible.  I ate way too much processed food and too little fruits and vegetables.  Even when Mary and I gave up meat and dairy a few years ago I was still eating chips, cookies and candy.  After all, Fritos are plant based, right? That pretty much stopped three weeks ago. On our recent cruise I had fruit and oatmeal for breakfast and salads for lunch and dinner.  I did cheat a little and had seafood occasionally but will be back to juicing, oatmeal and salads tomorrow.

In Mark chapter 9, a father approaches Jesus and tells him about his son who is afflicted with a disease that prevents him from speaking and causes him to foam at the mouth and roll around on the ground.  He asks Jesus to heal his son but adds, “If he can”.  Jesus’s reply in verse 23 was epic.   “If you can’?” said Jesus. “Everything is possible for one who believes.”  I believe that Jesus is healing me and will heal me.  No one can tell me that He can’t and won’t.  Furthermore, I refuse to sit at home and whine about what could have been.  Mary and I are going to do the things we’ve been planning to do during retirement and when God decides to call either of us home we’ll go knowing we held nothing back. 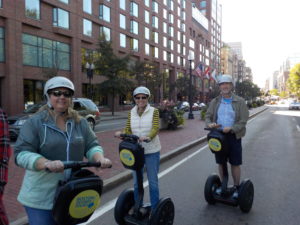 Carla, Mary and I Segwaying in Boston on our New England cruise.